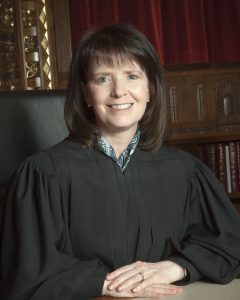 For more than two decades, Justice French has dedicated her career to public service. In that time, she has served as a lawyer for a state agency, an assistant attorney general, counsel to the Governor, and, finally, as a judge.

In 1993, she joined the Ohio Environmental Protection Agency as deputy director for legal affairs. From 1997 to 2002, she worked for Attorney General Betty Montgomery as an assistant attorney general, and later as chief counsel.

From 2002 to 2004, Justice French served as chief legal counsel to Governor Bob Taft. In that role, she served as the chair of the Sex Offender Registration and Notification Task Force, which made recommendations to the legislature for making Ohio’s sex-offender laws more effective.

In 2004, Justice French was elected as a judge on the Tenth District Court of Appeals, which hears appeals from Franklin County courts and state administrative agencies. While a judge on the court of appeals for eight years, she authored more than 800 legal opinions.

In December 2012, Governor John Kasich appointed Justice French to fill a vacancy on the Supreme Court of Ohio. She became the 155th justice of the Ohio Supreme Court on Jan. 1, 2013.

And in 2015, United States Supreme Court Chief Justice John Roberts appointed her to serve on the Federal Appellate Rules Committee.

Although her 25 years of public service are critical to her understanding of state laws and the Ohio judicial system, Justice French also has the benefit of experience in the corporate and private-practice arenas. She began her career as an attorney with the Columbus law firm of Porter, Wright, Morris & Arthur, specializing in environmental law. Justice French also served as in-house counsel for a large manufacturing company.

Justice French grew up in Sebring, Ohio, a small town in Mahoning County. She graduated from Sebring McKinley High School in 1980, when she started her undergraduate studies at The Ohio State University.

She received three degrees from OSU: a B.A. in political science, an M.A. in history (with a concentration in military history and strategic studies), and a J.D., with honors. She is a member of the Moritz College of Law National Council, and in 2018 was awarded the college’s Distinguished Jurist Award for her work on the bench.

Justice Judi French currently resides in Grandview Heights, near Columbus, with her husband. They have two children. 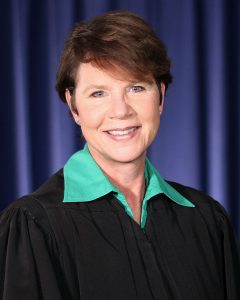 Prior to her term on the Ohio Supreme Court, Justice Kennedy served at the Butler County Court of Common Pleas, Domestic Relations Division beginning in 1999. From 2005 until December of 2012, Justice Kennedy served as the administrative judge of that division. During her time as administrative judge, she improved the case management system to ensure the timely resolution of cases for families and children. Working with state legislators she championed a “common sense” family law initiative to reduce multiple-forum litigation for Butler County families.

In 1991, after obtaining her law degree from the University of Cincinnati College of Law, Justice Kennedy ran a small business of her own as a solo practitioner. While in private practice she served the legal needs of families, juveniles, and the less fortunate. As special counsel for Attorney General Betty D. Montgomery, Justice Kennedy fought on behalf of Ohio’s taxpayers to collect monies due the State of Ohio. As a part-time magistrate in the Butler County Area Courts, Justice Kennedy presided over a wide array of civil litigation and assisted law enforcement officers and private citizens seeking the issuance of criminal warrants for arrest.

Justice Kennedy began her career in the justice system as a police officer at the Hamilton Police Department. She was assigned to a rotating shift, single-officer road patrol unit working to protect and serve the citizens of the City of Hamilton. From the routine, to the heart-pounding, to the heart-breaking, she has seen it all. During her time as an officer, Justice Kennedy also worked undercover operations, implemented crime prevention programs, and later, as a civil assistant, assisted in drafting police policy and procedure for the Accreditation Program.

Throughout her career Justice Kennedy has served on numerous boards, developed and facilitated programs to address the needs of young people, and worked with judges across the state. As a dedicated jurist she has received multiple awards of recognition including: The AMVETS Department of Ohio 2018 Past Department Commanders Civil Servant of the Year Award; The National Society of the Sons of the American Revolution Silver Good Citizenship Medal, May 5, 2018; Leadership Ohio Community Leadership Award, 2016; The University of Cincinnati College of Law Nicholas Longworth, III Alumni Achievement Award, May 17, 2014; Northwest High School Distinguished Alumnus Award, April 25, 2014; named one of 13 professional women to watch by The Cincinnati Enquirer, March 17, 2013; Excellence in Public Service, June 2009; Judge of the Year, 2006; Above the Fold Award, 2002; and the Furtherance of Justice Award, 2001. Justice Kennedy was also featured in Trends in the Judiciary: Interviews with Judges Across the Globe, Volume II, published by CRC Press in February 2015.